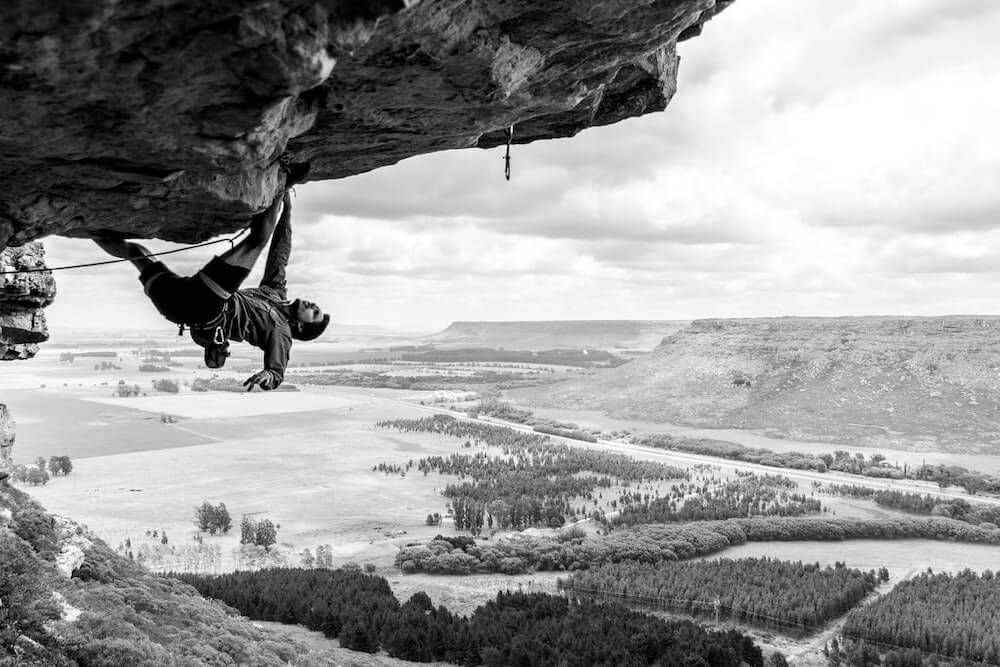 Buying a new climbing rope is a bit like signing a cell phone contract. There are countless versions for seemingly countless purposes.

You can lose the courage or the desire to store. And if you ask others for their opinion, you quickly end up with three opinions from two people.

We thought we would bring a little order into the matter and explain to you what types of ropes there actually are. So what exactly is the difference between single ropes, half ropes and twin ropes? And which is best suited for which purposes?

First of all, we can distinguish between two “basic rope types”: the static and the dynamic ropes.

Static ropes, or “low elongation kernmantle ropes” as they are called in DIN German, are used wherever the load is purely static, for example in mountain rescue or as fixed ropes. A static rope has only a very low elongation (max 5%), so strictly speaking it is only a semi-static rope, but colloquially it is called static rope among climbers.

These ropes must not be used for climbing under any circumstances (neither pre- nor post-climbing)! Due to the low elasticity, serious injuries can occur even in falls with a fall factor <1!

The counterpart to this are dynamic ropes, which can stretch due to their twisted fibers. By stretching, they are able to absorb energy released during a fall. Without these properties, very high forces would act on the climber in any fall. A dynamic rope can therefore absorb forces that occur during a fall and thus prevent or avoid injuries.

The higher the elongation, the more force is absorbed. However, this must generally not exceed 40 percent, otherwise the risk of hitting ligaments or the ground is too high.

There is a lot of overlap in the areas of application of the various ropes, but we have nevertheless tried to assign the ropes to individual disciplines.

Single ropes are mainly used for sport climbing in the hall, in the climbing garden or for ice climbing. They are pleasant and uncomplicated to handle and are usually robust and durable due to their large diameter. However, it is not only the diameter that is decisive for durability, but also the sheath ratio. This is the mass ratio between the rope sheath and core. The higher the proportion, the more abrasion-resistant and durable the rope. On the descriptions of a rope, the sheath percentage is always specified.

If you climb a lot indoors or intensively in the top rope, you should pay attention to a high sheath percentage, because this is where the rope is subjected to the most stress.

The thicker a single rope, the more tear-resistant it is – however, with every millimeter, the friction also increases – both in the intermediate belays and in the belay device itself, which makes climbing more strenuous. If you advance a lot and climb long routes, it’s worth going down a bit with the diameter of the new rope to save on friction and weight.

For beginners, a good guideline is to buy a rope with a diameter of more than ten millimeters.

Many single ropes have a mark in the middle. This serves to ensure that when climbing ahead, the climber does not climb higher than half of the total rope length. For those who are often in different climbing gardens, “bicolor” ropes are recommended. The halves of these are each colored differently, making the center of the rope clearly identifiable – even after a certain period of use. Center markings serve the same purpose, but can often no longer be recognized as well, especially after prolonged use.

It is not uncommon for single ropes to be used for high-altitude tours, e.g. when climbing passages occur on rock. Here, one then usually chooses a fairly thin single rope, as these weigh less.

Half ropes are mainly used in alpine climbing, on alpine tours and in trad climbing. The use of two different rope strands increases redundancy: the likelihood of both ropes being cut at the same time by falling rocks or a sharp edge is extremely low.

However, the biggest advantage of half ropes is that you have the full length for rappelling (60 m single rope = 30 m rappel distance. 2×60 m half rope = 60 m rappel distance). This can be very helpful especially when retreating/abandoning from a route. However, it is not always necessary to use half ropes in a double strand – on a glacier, for example, where no “heavy” fall is foreseeable, you can safely carry only one strand. However, this should be impregnated, because a wet rope is not only much heavier, but also more unwieldy (especially when it freezes) and loses its load capacity.

The alternative to the half-rope technique is the twin technique – here both strands are always hooked.

Climbing ropes come in standard lengths ranging from 20 to 200 meters. When choosing the length of the rope, you should first be clear about what it will be used primarily for. Indoor or alpine tour? High altitude tour or climbing garden? When rock climbing, it is worth taking a look at the topo. How long is the tour? Are there rappelling points, and if so, over what length do you have to rappel? Many climbing guides already give recommendations on rope length, but as a general rule, you should stick to a 70-meter rope for outdoors in order to still have reserves in case of emergency. In the climbing garden with short routes, 50 m is often sufficient, but in alpine multi-pitch tours with long rappels and large distances between the belays, you should play it safe with 80 m or even 100 m. On high-altitude tours, shorter ropes are often used for weight reasons, but this depends on the size of the rope team. A short rope can also be used for belaying in via ferrata or hiking – 30 m ropes are ideal for this application.

What is the Groin Protector Called and How to Choose It

How to Boil a Mouth Guard

Is it Possible to Box With Braces: How to Choose a Boxing Mouth Guard for Braces

How to Choose a Rubber Surface for Sports Grounds

How to Choose Boxing Bandages?

Suit-Sauna and it’s Use for Training Boxers